5 Business Lessons from a Backyard Skunk

My husband and I moved into our new home in August of 2015. Starting the day we sat outside in the front yard waiting for our realtor to bring our new keys to us, basking in the late July sun we met our first neighbor. Her name is Connie and she was friendly, very informative about the neighborhood, and casually mentioned we might want to check out the backyard. The foreclosed house had stood empty for a full year by the time we made our offer, and one of the agreements was that the bank would continue caring for it while empty. Apparently, that ended the day they accepted our offer. The “lawn” was waist high grass in places, the blackberries out of control and weeds rampant.

A few days later, we met the next door neighbor who casually mentioned they thought a skunk was living under our backyard deck. Most houses in the neighborhood had the same problem after a nearby forest was plowed down for new development. They all dug trenches with chicken wire around their decks to keep the critters out, but the previous owners of our house did not. 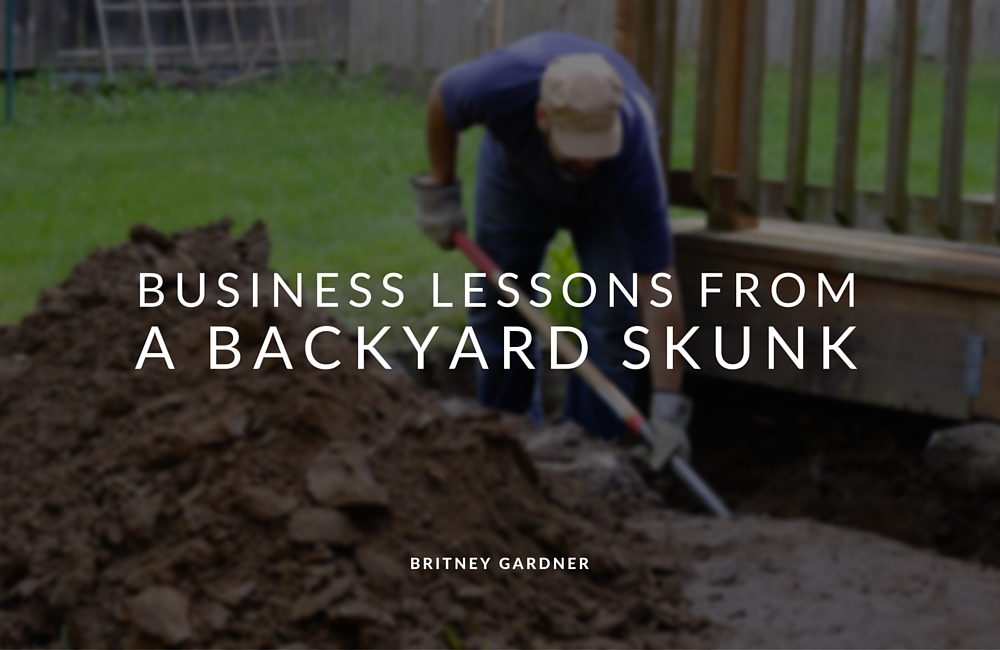 We heard those words, but we had several house projects that need attention first, so we could move in. We put the trench digging off for a while. Friends of ours brought in their power mower and helped whack down the overgrowth and blackberry brambles that took over, and then we saw how hard the ground was. Digging a trench in August with the dried out, uncared for soil seemed like a lot of work. So we said, later. Maybe after the rain starts, the ground will soften and we can deal with it then.

When your business coach says your idea needs fine tuning, listen. When they say they’ve been there and get it, listen. When your neighbors say you’ve got a skunk problem? LISTEN.

December rolled around. While I sat upstairs in my office at this computer one afternoon, eau de skunk started wafting into the house in a pungent, unpleasant manner. Did a skunk get inside somehow? We couldn’t figure it out, but it was awful! And it was a chilly, windy day, so windows weren’t helping. I went to a friend’s party that night and after a few hours at her house, I opened my car door to be greeted by eau de skunk. The odor permeated through the garage, into my car. 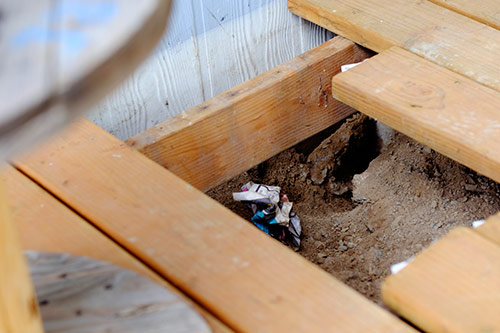 Failure was not an option. The skunk must go. We assumed it was living under the deck and started poking repellant pellets down there. My husband poured ammonia down there. Nothing seemed to work. Every few weeks or so, we’d smell the skunk again. Eventually he pulled up half the deck boards and used gopher gas bombs to smoke out the skunk.

Each option failed. We kept trying new approaches. Much like a business owner may try multiple ways to market a product launch, we kept at it.

However, at some point, you have to realize that some things just aren’t meant to be DIY’ed.

Lesson #3: Build a Team Around You

For us, that point came after my husband almost fumigated himself. The gas bombs came in a pack of three. The first one, he just threw down the hole. The second one, he threw down the hole after closing up other egress points. Except, just after he dropped in that second gas bomb, the wind picked up. He went upstairs and started working again as it was mid-afternoon, so he didn’t realize how windy it’d become. The gas started wafting towards vents on the outside of the house and due to the high wind, vacuumed right inside. Joe started to feel off, then extremely nauseous before he realized what had happened. He immediately opened every window, but had a nasty headache and very prickly throat the rest of the day.

That was the moment I decided, enough was enough. There are experts in this kind of thing. I’ve hired experts to audit my Facebook ads when they aren’t performing well and I could very well hire a skunk removal company. Nothing is worth accidentally fumigating your family.

Of course, there was still that third bomb, so in between calling and getting an expert out here, Joe threw the last bomb in – on a still, breezeless day! And then poured in Quikrete over it. You already know what happened, I’m sure. The skunk dug around the concrete and made a new hole.

So we hired Critter Control and they put out two skunk traps, one on either side of the deck.

Lesson #4: The Long Game is Worth It

I had this illusion that we’d hire someone to trap the skunk and in a day or two, we’d have an angry, trapped skunk.

As it turned out, we called them in the beginning of March, right as everything started blooming. A week passed. Then two weeks. I was convinced the night before one of my webinars I heard a trap close in the middle of the night, but no.

After a few weeks, they added a third trap. Still, no skunk. We took to putting crumpled up newspaper in the hole opening to see if the skunk was even living here still and every five days or so, it would move the paper. But still, empty traps!

My podcast launched on April 1, several weeks after we got the first traps in the backyard. I started getting emails, phone requests from marketers asking me when I’m going to monetize my podcast, what I’m getting out of it. Later, I said. This is an educational podcast and I’m willing to play the long game on it. I know it’ll pan out eventually. 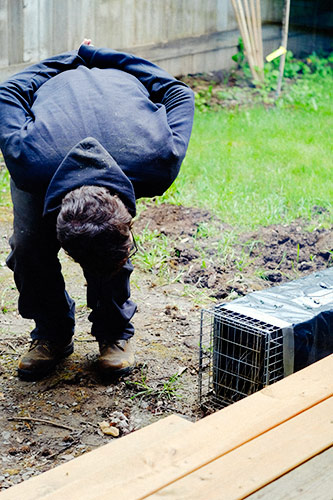 Two weeks ago we excitedly woke up to a closed trap and thought we caught it! But no, it just fell closed on its own. No skunk. The critter guy came out to reset and bait the trap again. While here, he offered recommendations on what we should change in the backyard. (Surprise, surprise, digging a trench and putting in metal mesh all around the deck is a part of it.)

The idea behind all of his recommendations were simple. Block off all areas of egress. Create a wall impossible to dig through. Leave only a small hole from which he can leave. Leave the trap on the other side of that hole.


Oh, and he changed the bait from marshmallows to peanut butter.

It’s the idea that you can lead a horse to water, but can’t force him to drink. You can force him to see the water and hope it’s enough, though.

Create a path for your clients. Guide them through the journey of attraction, what it feels like to work with you, and then the results you offer. Show them, don’t tell them. Set up confidence and trust boosters every step of the way so that when they get to the end of the path, they can’t help but hire you. You’re the best solution at that point.

Our critter guy came out once more a week later, while we were out. He left a note on the log saying he changed the bait to cheddar and bacon–and I quote–“because everybody loves bacon.”

Fast forward a few more days to last night, when I woke up at 2:30am to a scratching sound. I lay still for a few minutes as it continued, then nudged my husband and told him I thought I heard the skunk walking around outside. Joe thought it might be a possum with long nails, as it sounded like that. So we snuck downstairs and tried to peer into the blessedly bright moonlit night. The larger trap was closed. I grabbed a flashlight and dared a beam. 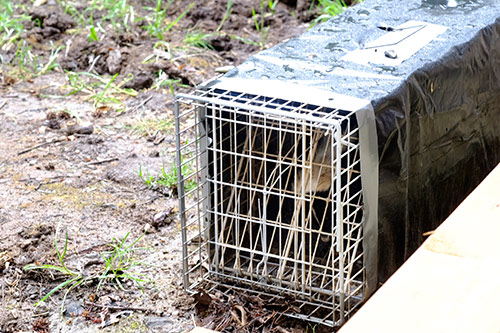 We got a skunk.

I didn’t sleep much for the rest of the night. Even with closed windows, the scratching was loud and desperate. I almost started feeling sorry for the little critter.

A new, weekend-duty critter guy came by to collect him around lunchtime today. We still have traps out, just in case he had some friends hanging out nearby. But I think we got him. My energy is now directed towards less smelly and more profitable endeavors.