Do you have a message worth listening to?

If you believe that you have a message worth listening to, then you have a responsibility to get that message out into the world.

I could probably end this article right here, but I’m going to elaborate a bit because this message is THE core of what I believe.

There’s a difference between a career and a calling.

And if you’re an entrepreneur you’re almost for sure doing your work due to a calling. So if you believe that strongly in what you do it’s probably because you value it for your own life and you know it will help others.

I’m not diving into politics here at all so hear me out for a short minute: at the time of recording this message, I don’t know the election results. If you’re in the US like me, things are a little funky right now. And whatever your political beliefs are, if you’re listening to this show I’m 99% sure you’re not a crappy person–meaning, you know caring about other people is not only important, but vital to the human experience.

In the podcast episode I did about memes, I referenced one of my most favorite social media posts ever. It was posted on May 28 of this year.

“I don’t know how to explain to you that you should care about other people.”

I stand by that, and I know that each of you listening right now feels the same way.

So if that’s the case, it leads to responsibility.

Your calling is responsibility.

If you believe you have a message worth listening to, you have a responsibility to get that message out into the world.

Here’s how this works, forwards:

If you’re a good human and you know that whatever it is you do helps people, it’s your responsibility to get your message out there. And that means planning that message! It means strategically applying content to build awareness.

When you get your message out there into the world, they see you. When you’re strategic with persuasive content, they start thinking differently about their problem and see you as an opportunity to help them fix that problem. They hire you. You actually help them. And then, they turn around and can help other people, because whatever it is that was stopping them isn’t anymore.

This is the ripple effect in action.

When you have passion, when you embrace your calling, you’ll find something curious happen.

At first, you’re really excited but you kind of feel like you’re putting on an act. This can turn into Imposter Syndrome if you don’t check it.

This is where you feel like you’re putting on an act.

But living and breathing your brand shouldn’t be an act.

I often think about Heath Ledger and his death and how he spent so much time researching his character, he couldn’t separate himself as a person from the character he played. As I put the content for this episode together I looked up a few things because I didn’t want to get my facts wrong.

One of the articles quoted, “Heath Ledger is one of the most successful method actors of all time.” And then went on to say he was so successful he couldn’t leave method acting behind and, essentially, became his character. Rumor has it that he died as a result.

Putting on such an act as a service-based online biz owner sounds like a far stretch, but it isn’t. Feeling like you have to put an act on to succeed is incredibly damaging.

The key to moving beyond conscious incompetence and into conscious competence where you DO know what you know is shaping how you present yourself. Shaping your character to the world. Shaping your reputation, that’s all branding is.

You can have authentic, automated marketing when you take this strategic approach. And to complete our competence journey, once you’ve laid out your content strategy and you’re applying it, you hit that unconscious competence level–that is, you know things so well you don’t even realize it anymore.

I’m not going to sugarcoat things here. Putting together an authentic visibility plan–to apply a content strategy that actually builds brand awareness for you instead of just posting for the sake of posting–isn’t easy work. It’s simple, but it’s not easy. It takes effort.

Anything worthwhile is usually hard, and friends, we can do hard things.

“When you do things for the right reason, it gives you inner strength when things go wrong.”

Being an entrepreneur is really just a series of doing hard things again and again, failing at most of them, and then eventually something starts to hit.

I think–deep down we all know.

We’ve got the gut feeling. Maybe we trust it, maybe we don’t. But it’s there.

And when people quit their businesses we hear a lot of different excuses, but only that person knows the real truth. Did they really do everything they could have? Did they really do all the hard things? Or did they coast and hope it would work out in some areas, if not all.

I’m not being mean, I’m being realistic. I’m being the kick in the butt you want if you really do want things to work, but you know you’re in a rut and struggling to get out.

To be fair, I cannot answer yes to a lot of these questions. Most of us can’t.

And that’s the whole point.

As entrepreneurs, we have all the freedom in the world but that doesn’t mean we’re using it to become successful.

Doing hard things is… hard. And the reality is that most will shy away from that. Regularly.

Being an entrepreneur by itself already means you’ve overcome some of that–you’ve already chosen a path full of resistance.

But I think–you’re still looking for the easy button.

You’re looking for the best part of having a boss (someone to tell you what to do) without the annoying part (the accountability).

Doing hard things all the time and failing at most of them is never going to feel easy because growing doesn’t feel like that.

When you really, truly put yourself out there–it can feel a bit wide open and terrifying that everyone is seeing you so deeply. Especially at first!

My personal story with embracing this vulnerability is long, but here’s a small part that applies to today’s topic:

If you’re a longtime listener you know I’m an 8 on the Ennegram and one of our weaknesses is feeling like we’re too much. I spent years of my life feeling like the odd girl out.

If you hated middle school or high school or any other typical “rite of passage” times, you’re not alone. We’re told our whole lives to be ourselves and at the same time, pressured to fit in and be the same.

It’s no wonder we become entrepreneurs and then fight against standing out!

Well guess what, I’m not only The Challenger on the Enneagram, I’m The Strategist on Meyers Briggs, an INTJ. And if you’ve taken the Fascinate test, I pull high in on the Prestige archetype.

Of course I felt like I was too much for the majority of people around me! INTJ’s are the rarest personality type and even rarer for a woman. But it turns out that those INTJ characteristics being highly analytical, creative and logical are perfect for forming brands and developing content strategy for the ever-moving and many-faceted world of online service businesses.

Being the most strategic, thoughtful and smartest girl in the room in high school was a lonely place when everyone else values fitting in.

But knowing how to be visible based on your strengths? That’s very in-demand in today’s online biz world.

And actually–in today’s noisy, distracting online world, there’s one mantra we can all use as we embrace our vulnerable sides in order to get real, get authentic and really show up.

If you putting your work out there bothers people, that’s not about you. It’s about them.

Because this is how it doesn’t work if it’s backwards, if you don’t take on this responsibility:

It’s not so apocalyptic all the time of course… but it might be.

This is where you declare, the ripple effect starts with me.

This is where you can start a movement.

Getting noticed in this busy world will take effort. But it takes a lot LESS effort when you’re willing to truly be seen, and that requires you to show up.

Ready to show up for your business and get your message out to the right people? Grab my free guide, Content Creation Rx. 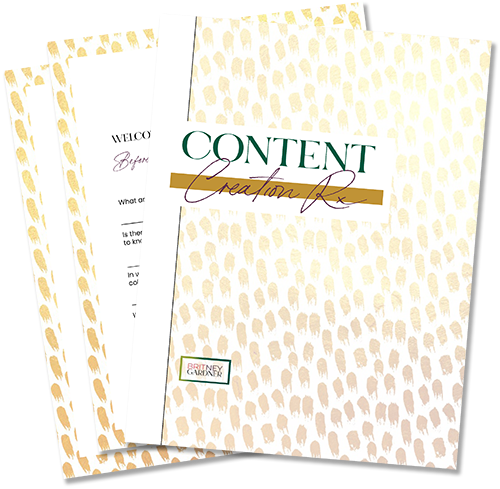