Be Seen. Step into a new way of BEING. These are the messages I send out daily and now, receive daily as well. And yet it kills a place in my soul to write them nearly every time, because it’s so passive. Will you allow me to explain?

I used to write reports and term papers and the like in Microsoft Word on my parents’ Compaq PC in the corner of our family room. In school, from the moment creative writing was encouraged, I loved to write. And I was determined to be an excellent writer, so when I ran spellcheck at the end of a document I paid rapt attention to the other tools. What was the grade level of my writing? How many uses of the passive voice? 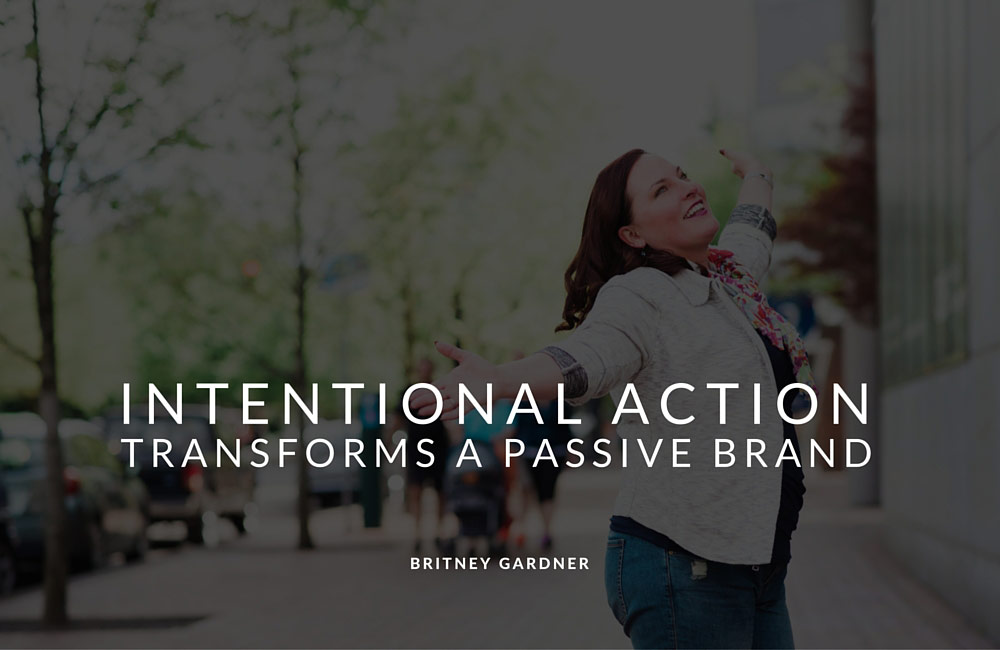 Two things brought me back. The first, a copywriting course called Six Appeal. The second, an online writing app. Perhaps a few years ago, a friend 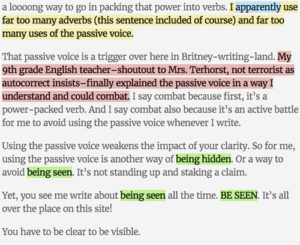 of mine suggested the Hemingway App. Nearly every blog post (unless I’m in a huge hurry!) here runs through the online version of Hemingway App. And it, again, brought my focus back to the quality of my writing. Six Appeal taught me to connect emotionally and how to pack power in my verbs. Hemingway App reminds me I’ve still got a loooong way to go in packing that power into verbs. I apparently use far too many adverbs (this sentence included of course) and far too many uses of the passive voice.

That passive voice is a trigger over here in Britney-writing-land. My 9th grade English teacher–shoutout to Mrs. Terhorst, not terrorist as autocorrect insists–finally explained the passive voice in a way I understand and could combat. I say combat because first, it’s a power-packed verb. And I say combat also because it’s an active battle for me to avoid using the passive voice whenever I write.

Yet, you see me write about being seen all the time. BE SEEN. It’s all over the place on this site!

You have to be clear to be visible.

So when I write about these subjects near and dear to my heart, my soul, and my entire value system, it’s really freaking annoying to see Hemingway remind me how passive I’m being. Even the word passive implies, no action. Not doing anything. More of the same.

Much of my work right now revolves around stepping into being. Or to honor the punched up verbs, marching into being! And my June goal is to be braver in my own brand, inspired by Amanda’s quote in a recent podcast episode.

So how can you rectify years of schooling and grinding out all uses of the passive voice with the personal development way of being? Of becoming?

I already hinted at it. It’s verbs, it always comes back to verbs.

I first articulated that a year ago. It is still my way of saying, step into being the person you desire. Where do you want your business to be in six months? A year? Act as if you are that person day.

You can step into being a new, better version of you. Or you can amble there, wander there, march into that future you desire. No matter how you put it, it takes intentional action. And that’s anything but passive.

*You’ll be pleased to note, according to Hemingway App, this article contains 8 uses of the passive voice and I should aim for 12 or fewer. I guess I’m okay.