How to Turn 3 Photos into 27 Marketing Pieces

I’ve recently spoken with a string of people who think more is better. In every business I’ve ever been a part of, I’ve lived by the quality over quantity mantra, and the same is true for personal branding. If you think about it, branding itself is meant to narrow your visibility to the potential clients most likely to admire you, become a part of your tribe, or hire you.

So when I hear those “out there” talk about the number of photos they need rising, I’m curious why they think so. Do they really need so many images or are they not looking at the great usage of the photos they already have. There’s something to be said about being bored of the photos you have and wanting to update them, or changing your appearance and needing to update them. But beyond that, having a huge collection of images is not necessary. And it can be harmful. Diluting your brand is never a good thing.

In the collections of branded photography I give clients, I encourage them to consider variety when choosing photos to use. Don’t think just about your needs today, but needs in the future as well. That said, I’m going to show today’s example using three images shot in the same outfit and on the same backdrop. A few weeks ago, I got my hair done and figured I may as well update a few photos in the studio while it looked great. I’m not awesome at self-portraits. I decided to make the best of it and set up one of cameras using my phone as a remote and, as they say, “had at it.”

I’m not always awesome at self-portraits.

I won’t out myself and tell you how many photos I took, but I will tell you that in over an hour, I ended up with few keepers. As it turned out, this was an excellent lesson. I’d like to take this post to remind you, quality over quantity wins any day. So I’m going to prove it, with three images. And they aren’t even great images because as previously mentioned, I’m not awesome at self-portraits.

First things first, let’s make my basic edits. Task 1: remove the phone from my hand in the first image. That whole not awesome thing? I wasn’t kidding. I didn’t even manage to hide the phone in most shots! Crop away, Britney. Task 2: edit the funny sticky-outy hair in the third image. In reality, only the first is headshot worthy, so I’ll extend the background on the other two as they’re better meant for social media posts and headers or banners. If you have zero graphic or photographic skills, you can hire someone on fiverr or retouchup.com to extend the backgrounds.

I’ll crop the first to a square so it is ready for social media profile photos, guest blog headshots, podcast cover art, summits, and so on. And then I also made a black and white copy, as I generally prefer myself in black and white. The color version is my current Facebook profile photo. 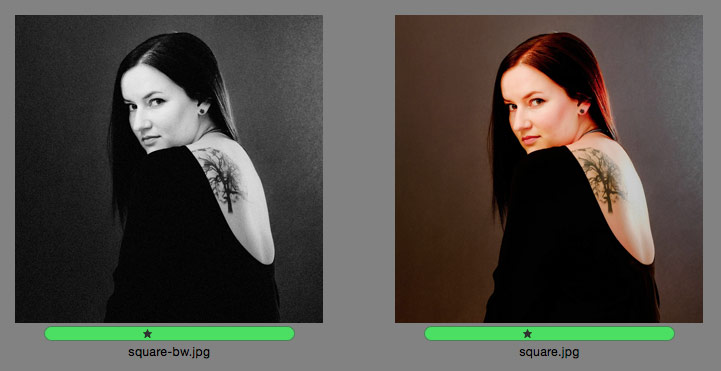 I cropped each image tighter as squares with my face in closeup because it shows the emotion and action better this way if the photo needed to be scaled down in size (like my current Instagram profile photo). I do this as a courtesy for my clients, or you can use tools like Canva or Photoshop or PicMonkey to do this. I prefer to keep the same profile photos as long as possible, but if you’re itching to change them up, this gives an easy way to do so.

And now comes the fun part. I use photos as part of branding, yes, but often the photo is a backdrop to the real message. I do this on all social media channels. I did this in Photoshop because I had actions defined to do this long before I found out about Canva, but you can absolutely do it in Canva, too. I could create color overly versions of each image in each brand color and call this 9 more images, but we’ll pare down to the three examples shown.

In fact, I’ll prove it. Because now I’ve got three Instagram quotes ready to go, too. Of course, I could use them elsewhere, but we’ll just count them as Instagram posts for now.

While I’m in Canva, I’ll just go ahead and make the featured image for this blog post. While I was at it, I used the other two photos and popped them into old post titles. If I were to make the direct gaze photo into a few other on-brand colors, I could keep using that same photo several times without really duplicating it, but again, we’ll just count that as three additional options for now.

The key, as you might be starting to realize, is choosing three different images. If you choose three images that are of you smiling straight at the camera with no variation in expression or body language, it’s hard to get a different feel for different types of things you’ll do with the images. In this case, I inserted this image into three actual posts I’ve used in the past. Again, I won’t do this for each image but imagine the exponential possibilities here.

I could use these as anything from social media conversation starters to guest blog images to Facebook ads.

Let’s move on to my email newsletter. In the last week, I’ve used these three graphics. We’ll just count the two of them since the other was a different image. I’ve used them both as email headers and the black and white one is also my Facebook cover at the moment. They’re just simple crops of the original image with either text or my logo as an overlay. And this is just my most recent week of emails!

The possibility of color overlay photos is simply a gateway to the possibilities. In any of the tools I’ve mentioned, it’s easy to blur out photos with busy backgrounds and use them in the same way I use the color overlays. You can also use a simple white or black overlay instead of colors if you just want to lighten or darken the background enough to see text. If it’s an outdoors image with a busy background you don’t want to blur, putting a white or black box beneath your text will still work, much like I do with my logo box or Motivation Monday caption.

The following two screenshots are promos and social media posts I’ve made in the last week or so, and it’s not even all the posts I’ve used!

Over the next few weeks and months, you’ll see a lot more of these images and more creative ways in which you can use the same few images to dominate your online presence. I’ve said it before, and I’ll say it again.

When you use the same images, it may feel boring to you. But that consistency builds a presence of visibility in your clients’ view. You want them thinking, “Wow, she’s everywhere!” It keeps you in the forefront of their mind so they can’t help but associate you with authority. When it comes time for them to choose who to hire, you’ll be the natural choice.

Does this post inspire your future needs? If you want to take a step further, I suggest you check out the content upgrade where I use JUST ONE image to make 30 days worth of posts. That’s right, 30 social media graphics from a single photo.
Download Cheat Sheet